After images surfaced this week of SAS soldiers posing with a Confederate flag proclaiming “Southern Pride” in Afghanistan in 2012, Associate Professor Clare Corbould wrote an explainer for The Conversation: “Why is the Confederate flag so offensive?”

Associate Professor Cassandra Atherton has a poem, ‘News Fast’, anthologised in No News: 90 Poets Reflect on a Unique BBC Newscast, Paul Munden, Alvin Pang and Shane Strange, eds, Recent Work Press, Canberra, Australia, 2020.  Cassandra was asked to record a reading of her poem, which can be accessed here.

Dr. David Wetherell has been busy writing an Introduction for a forthcoming book. Titled Cook Islander missionaries in British New Guinea (Papua) 1872 to 1914 vol II, the book commemorates the Bicentenary of the founding of Takamoa Theological College Rarotonga in 1821.  Publication is expected by the end of this month.

29th July: Henry Reese.
Zoom invitations were sent out earlier this week. If you missed out on a Zoom invitation please contact Jacqui Baker (bakerjacq@deakin.edu.au)
Title: A Microhistory of an Australian Soundscape: Listening to the First Phonograph in Warrnambool, 1896–97.
Abstract: Histories of sound recording have emphasised the rapid global spread of the ‘talking machine’ following its invention in the United States in the final quarter of the nineteenth century. Historians have emphasised the technology’s ability to facilitate cultures of mobility 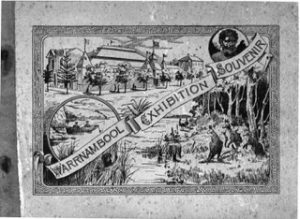 and connection across vast distances in its early years. This paper takes a narrower focus, exploring the intensely local configurations and negotiations that attended on the arrival of sound recording technology in late colonial Australia. By offering a close reading of the first phonograph in the town of Warrnambool in the Western District of Victoria, I demonstrate that early demonstrations of recorded sound could encourage audiences to listen closely to their local acoustic environments. Using newspaper reports and personal papers, I reconstruct the career of Thomas Rome, who performed with his sound recording technology at the Warrnambool Industrial and Arts Exhibition in 1896–97, exploring the economic, social and cultural factors that brought this piece of machinery to a regional Australian community. I argue that, when we embed it deeply in its local context, Thomas Rome’s phonograph highlights the connections between local community, settler colonialism, and emerging cultures of global modernity.
Henry Reese completed his PhD at the University of Melbourne in 2019. His doctoral thesis, ‘Colonial Soundscapes,’ was the first cultural history of early sound recording in Australia. His research combines histories of sound and the senses with histories of race and colonialism, business and popular culture. In 2019 he was awarded the AHA’s Ken Inglis Prize and Economic History Society of Australia and NZ Postgraduate Development Prize. He is currently working as a research assistant on several ARC projects, as well as doing the audio production for the University of Melbourne’s Forum podcast. He is also a musician, with two solo albums released on record labels in London and Brisbane.
12th August: Gwyn McClelland.
Zoom invitations to be distributed shortly.

Title: Seventy-five years after the Nagasaki bomb: Listening to the Catholic survivors.
Abstract: I will introduce my new monograph, and my oral history work with Catholic survivors of the atomic bombing of Nagasaki. In 2019, I visited Nagasaki at the time of Pope Francis’s visit and observed the community’s response. I will discuss the changes since the 1981 visit of Pope John Paul II, who began a speech at Hiroshima, “War is the work of humanity” and how 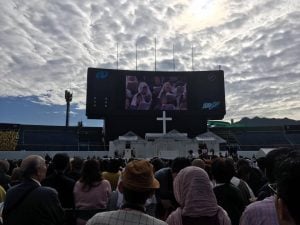 these comments have supported a transformation of the community’s previous interpretation of the atomic bombing as a part of God’s providence. The narratives of recently outspoken survivors demonstrate the resilience of a surviving community, for many years persecuted by the Japanese authorities.

Dr. McClelland holds a Master of Divinity from the University of Divinity, Melbourne, Australia and a Doctorate of Philosophy in Japanese history from Monash University. In 2020 he will teach in the Deakin University unit, “Conflict and its Legacies in Modern Asia”. Gwyn was a secondary teacher of Japanese and Geography for some twenty years and while doing his PhD at Monash he taught in Education (Bilingualism and Languages Methodology), History and the Japanese language. In 2019 he coordinated a modern Chinese history unit at Monash University, ‘The Fall and Rise of Modern China’. Gwyn is the winner of the 2019 John Legge prize for best thesis in Asian Studies, awarded by the Asian Studies Association of Australia (ASAA). Gwyn has taught at Monash, RMIT and Melbourne Universities and he has participated in recent workshops at Copenhagen University (Center for Contemporary Buddhist Studies) and the University of California, Berkeley. His monograph, based on his work interviewing Catholic survivors of the Nagasaki atomic bombing was published in 2019 by Routledge in Mark Selden’s series, “Asia’s Transformations” and is entitled ‘Dangerous Memory in Nagasaki: Prayers, Protests and Catholic Survivor Narratives’.