Jo Chandler has been awarded the 2020 Sean Dorney Grant for Pacific Journalism (along with Nic Maclellan) for her project ‘Degrees of Change: The fight for climate justice in the Pacific’.  Established by the Walkley Foundation, the Sean Dorney Grant for Pacific Journalism aims to encourage more and better journalism about the Pacific Islands region by Australian media professionals and news outlets.
The judges were impressed by Jo Chandler’s proposal to examine the pressing issue of climate change in the Pacific. They were taken with her idea to bring us not a narrative of passive and powerless victims, but instead one of how individuals and communities are adapting to this dangerous and dynamic new state, and to ask what tools and resources they are working with to adjust, with a particular focus on the burden on women.

Mia Martin Hobbs has received commendations for the AHA Serle Award. This biannual award is given to the best postgraduate thesis in Australian history. The judges thought that Mia’s thesis, ‘Nostalgia and the warzone home: American and Australian Veterans return to Viet Nam, 1981-2016’, offered new insights into war, public, and private memory. You can read the comments in full here.

PhD Candidate Lee Sulkowska has been awarded the 2019 Vice Chancellor’s Prize for her Honours thesis ‘Death in the Colonial Garden: British Ideals and Settler Realities’. The Vice Chancellor’s prize is awarded to the top four honour students with the highest academic record in each Faculty.

Associate Professor Cassandra Atherton has written an artist’s statement, “What is Dark Poetry”, which has been published in Axon Journal. Cassandra has reflected on Dark Poetry and has offered five considerations.

CHRG is pleased to announce that the seminar series is back in trimester 2. This time round, we will have a mix of presentations with Q&As and some discussion of pre-circulated papers. We kick off this Wednesday with Filip Slaveski.

This presentation will be held via Zoom. For an invitation, and a copy of Filip’s paper, please contact Jacqui Baker (bakerjacq@deakin.edu.au)

Abstract: Victims of mass repression in Stalin’s Soviet Union were subject to physical and psychological torture by their interrogators, forced to confess to crimes they did not commit. Many eventually broke under this torture, accepting that continuing to resist the interrogations was pointless as well believing their interrogators’ assurances that confessing would save their lives. The interrogators lied. Confessing rarely saved the victim’s lives—it was often the last step to their execution. As evident in the vast literature on the victims of Soviet repression, their initial resistance and, indeed, eventual compliance to the state, was futile.

The case of Ukrainian communist Oleksandr Shumskyi encourages us to rethink the futility of resistance. Shumskyi survived his tortures exactly by continuing to resist them for over a 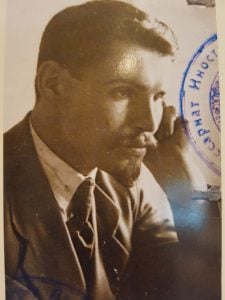 decade and waging his own campaign against his unlawful arrest. By refusing to confess to the false charges made against him, Shumskyi denied his interrogators one of the key pieces of evidence they required to help demonstrate the “legality”, however perverse, of their investigations against him and others. For the state, his refusal denied it the legitimacy of its violence and stumbled the machinery of its repression. This book examines the relationship between resistance and survival by focusing on Shumskyi’s arrest and incarceration from 1933 to his death in 1946, within a broader analysis of the fate of his associates within the Ukrainian political elite and intelligentsia also arrested at this time. It draws on unique declassified security files to analyse the state’s response to such resistance and asks what impact it had on the course of mass repression. This examination opens a small window into the obscure history of non-compliant political criminals who survived for years within the Soviet penal system without confessing. It reveals new insights into the history of mass repression and has significant implications for the contemporary remembrance of victims of communism in Ukraine, across the post-Soviet space and in the West.